Happy Monday! Today is the reveal of my Food Pen Pal package and also I'd like to update everyone on what's going on in my life. As you can tell, I haven't been posting as much lately. Part of it is because I am so busy with my baby boy, but also a few other things. I thought I was going to be moving to another state, so I spent a whole week researching the area, movers, etc. It was going to be an immediate move - meaning I had 3 weeks to get everything together, so I was trying to crunch everything as quickly as I could. Well, it turns out it isn't happening, so that weight is lifted off of me. Also I started working last week and I'm still trying to get used to my new schedule. Finding a routine with breastfeeding/pumping, working, spending time with my family, keeping house and cooking is pretty overwhelming. I'm starting to get into the swing of things, but I think in another 2 weeks, I should have it down. I'm hoping that by the beginning of November that I'll be back and posting regularly on the blog (2-3 times a week). I want to thank all of you for your support and understanding. 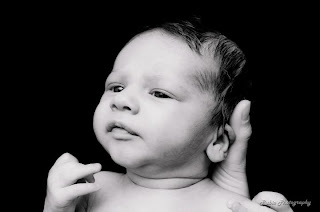 My son is going to be 12 weeks tomorrow and I can't believe how quickly time has flown by! It's been an amazing time so far and I couldn't imagine not being a mother at this point. I don't know how I got by! Jared is already holding up his head, cooing and reaching for mommy when he needs love. He's over 13lbs and over 2ft tall already, he's such a big boy. I'm so lucky to have such an awesome son.

I received the most amazing package this month from Valerie of That's What We Did! She sent me a lovely variety of spicy and sweet items. She also sent me an awesome recipe to make Spicy Chocolate Clusters using the granola and spicy peanut butter that she sent. They sound like they'd be great to make and take to work. I'll post pictures and the recipe once I get a chance to make them (or you can check out her post here). 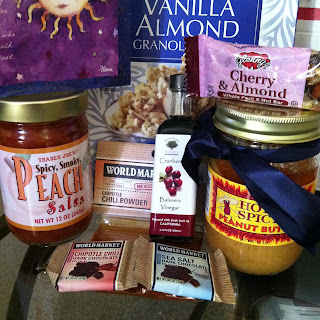 Here's a breakdown of what was in the box: 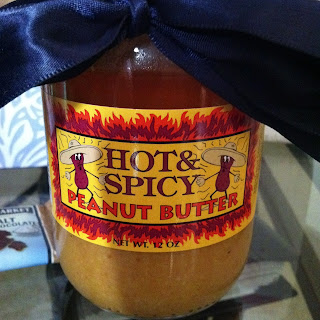 As most of you know, I love spicy foods and I love peanut butter. Well I got both in one jar! Spicy Peanut Butter!!!!! It's so awesome, especially with jalapeno pepper jelly. It the new Laurie's PB & J. It's made locally to where Valerie is from (Ohio), which makes me so happy. I love trying local foods from different areas. Following the spicy theme - I also received a delicious piece of chipotle chocolate, which was enjoyed with a nice cup of coffee. Absolutely heavenly :)

I actually served some of the peach salsa yesterday during the football game with some blue corn chips. It's really balanced and tasty. I reserved some to serve over some broiled fish later in the week. It will make it easy to put together a quick week night meal.

Hope everyone has an awesome week and I'll beginning posting regularly soon!

Cornbread is so easy to make - especially if you purchase a box of cornbread mix. I try to always have a box on hand, to make meals easy during the week. You just add in whatever flavors you'd like and within minutes you've got a savory or sweet bread. I've made a variety of cornbread - blueberry, extra cheesy, smoky, and of course super spicy. This is my version of a southwestern cornbread. Slightly spicy and a bit cheesy. I like having some texture, so the corn kernels are great to have. I love serving cornbread with something wet, like chili or gravy. I will slice a piece, and toast it a bit (so it is nice a crunchy on the outside) and then crumble it on top. Or I'll just lightly butter it and scarf it down. I apologize in advance that there are no pictures of the cornbread sliced - it was eaten before I got a chance to take a picture. I guess it means it was good :)

I've made this cornbread with unsweetened almond milk and it turns out just fine. Also I do recommend using the sugar, it really helps bring out the sweetness in the corn. It's subtle, but sure makes a huge difference! I used Jiffy cornbread mix, but any brand will do. I've tried many varieties and they are all good. I just make sure to purchase the ones that are plain (with no added flavorings). 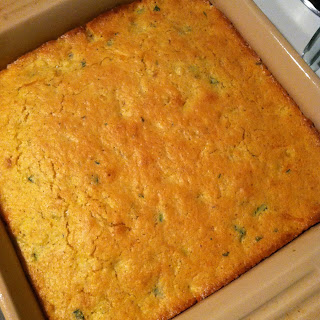 In a large bowl, combine the rest of the ingredients. Mix until it had all come together. 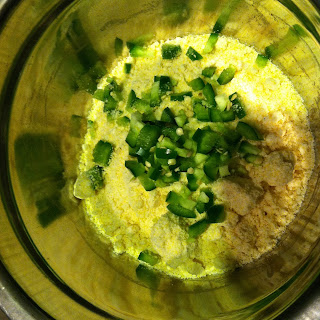 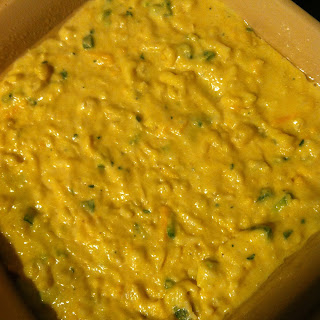 Once the corn bread is golden brown and completely cooked, allow it to cool for about 5 minutes before cutting and serving.

I used to make rice crispies all the time when I was younger. It was easy to make and tasted so much better fresh than the packaged versions. Plus I felt like such a big girl, making my own desserts and snacks. This is an updated version of those treats. I've experimented with peanut butter, almond butter and now I'm making it even better with some nutella. Who doesn't love nutella?! Sweet, hazel-nutty deliciousness. These are a great no-bake dessert or snack. It takes less than 10 minutes to make, which is awesome, since I don't have a ton of time with the new baby, to be whipping up something sweet. I am definitely a chocoholic, and having something on hand to satisfy that craving is always a good thing. It keeps me from reaching for the not-so-desirable candy bars and similar treats. These are quite rich, so I recommend eating as more of a dessert than a mid afternoon snack.

I used puffed Kamut,  but you could use any puffed unsweetened cereal. I just happened to have Kamut on hand. 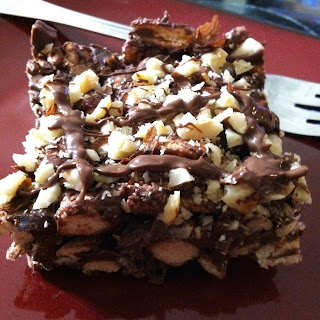 In a small skillet, toast the hazelnuts in a dry pan for about 5 minutes over medium heat. Shake the pan every so often and set the toasted hazelnuts aside. Once cooled, chop the nuts. 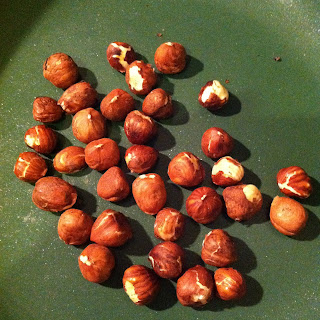 In a large pot, over low heat, combine the butter, 3/4 cup of the nutella, marshmallows, vanilla and cinnamon until melted through. 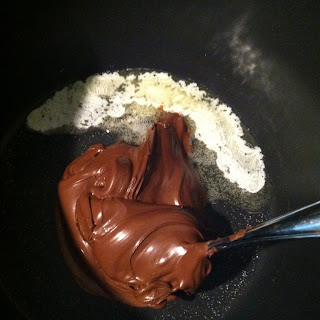 Stir in the kamut puffs, until well coated with the nutella mixture. 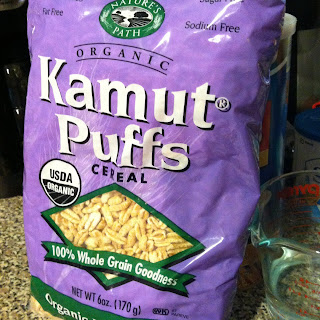 In a 9 x 9 pan (or whatever size you'd like), even spread the kamut/nutella mixture into the pan. Press down well, compacting it into the pan.

Sprinkle the chopped nuts evenly over the crispies, and press down slightly. 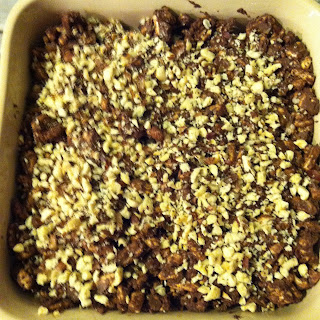 In the microwave, heat the leftover 1/4 cup of nutella for about 15 seconds or until slightly melted. Drizzle the melted nutella over the top of the crispies. 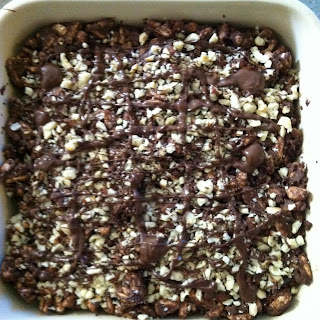 Place the pan into the refrigerator for about 20 minutes, to allow the chocolate to set. 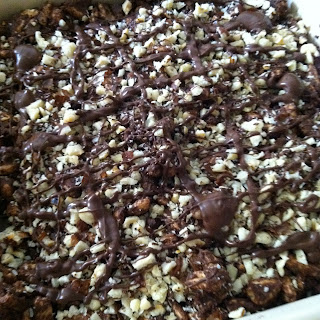 Cut into 9 pieces and enjoy! 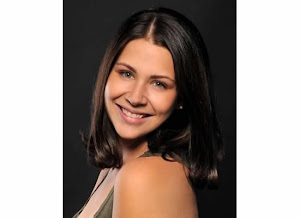 Welcome, my name is Laurie Dominguez, CHHC AADP. I'm a Holistic Health Coach practicing in South Florida (and a

new mom)! I'm not a chef by any means, I'm a self taught, amateur cook who enjoys reinventing recipes and experimenting with the ingredients I have on hand. It's all a learning process, and I'm enjoying reaping the benefits. My take on most recipes is trying to make the meal better - less oil, less sugar, and more of the good stuff. Eat to live not live to eat - I believe as a society we over consume too much of one thing. Balance is key. Eating should be an experience, not a mindless task we do everyday. Being conscience of what you are eating, how you are eating and relishing in it, is the most satisfying way to enjoy a meal. I consider myself to be a pretty simple eater, eating most things as they are or prepped simply. When you are present with your meal, the most simplest dishes can be the tastiest. I mostly use organic, local and humanely treated ingredients (which I recommend everyone does). Respect your body: nourish it with high quality food, that you prepare yourself. Love flows through your food, share that love with yourself and your family.

I'm always craving something...so follow me as I give into my cravings!